From our two friends: Psyche’s Call with Donna May and our lovely poet, Mary Oliver. How we appreciate and love them both.

Sometimes the days are so difficult. This election, these politics, this earth, and the animals that walk with us. Sometimes we just long for our children to be small and our lives, our selves—to be ignorant.

Too many people sick, too many people playing the end-games of their lives. And still, from our dear ones—Now. Just Now. Shsssssh…

Just a little pause from the news of the day, any day. Time out for just a moment’s breath, and some beauty.

Sometimes there’s just nothing to add.

“Drink water from the spring where horses drink. The horse will never drink bad water. Lay your bed where the cat sleeps. Eat the fruit that has been touched by a worm. Boldly pick the mushroom on which the insects sit. Plant the tree where the mole digs. Build your house where the snake sits to warm itself. Dig your fountain where the birds hide from heat. Go to sleep and wake up at the same time with the birds – you will reap all of the days golden grains. Eat more green – you will have strong legs and a resistant heart, like the beings of the forest. Swim often and you will feel on earth like the fish in the water. Look at the sky as often as possible and your thoughts will become light and clear. Be quiet a lot, speak little – and silence will come in your heart, and your spirit will be calm and full of peace.”
-Saint Seraphim of Sarov 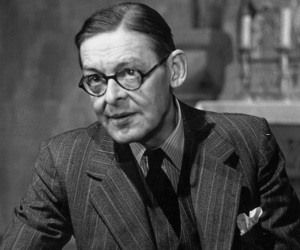 2nd June 1951: American-English poet and playwright, TS Eliot (1888 – 1965). He wrote amongst many other things, ‘The Waste Land ‘ and the plays, ‘The Cocktail Party’ and ‘Murder in the Cathedral’. Original Publication: Picture Post – 5314 – Are Poets Really Necessary? – pub. 1951 (Photo by George Douglas/Picture Post/Getty Images)

I seem to be running one day behind on things, most especially on birthdays. It was Glenn Gould’s birthday yesterday, September 25. *Sigh*

He’s an all-time favorite, the best of pianists, and an all-around honorable fellow. He predicted his own death at 50 years of age, saying he would die then and of a stroke. In later years he became obsessed with checking his blood pressure. The question then becomes, did he indeed know it in advance, or did he direct it by obsessing over it? Truth is such a tricky thing at times.

Photo at top is from the Boston Globe and the one on the bottom from the NY Times.

When you watch a video you can clearly see how he uses his left hand to direct his right hand, especially when playing Bach.