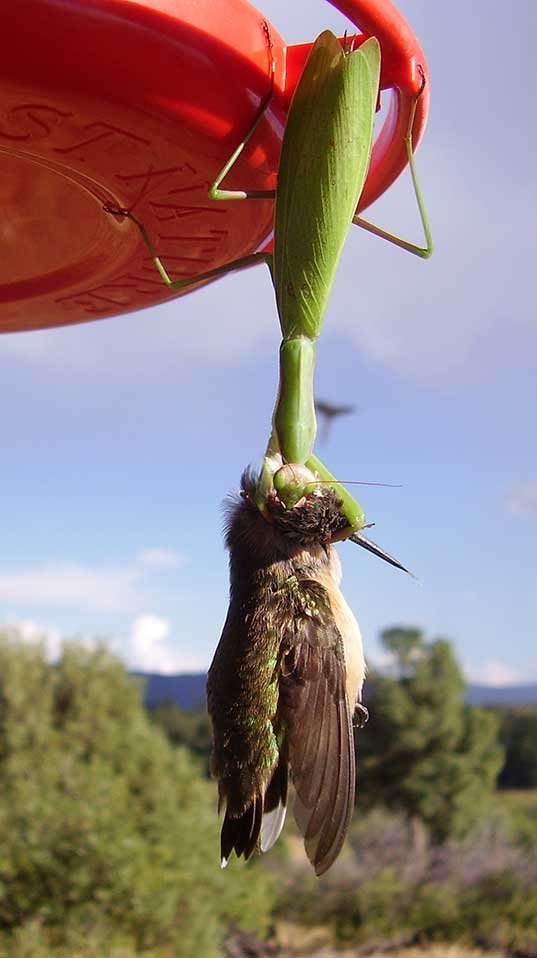 Praying mantises Are killing birds and eating their brains. Unbelievable news. Not new information apparently, just news to me. The photo above, taken by Tom Vaughn via university of Basel, shows the mantis hanging from the humming bird feeder where he has pierced the skull of the humming bird and is sucking out its contents. There are documented cases of them doing this worldwide.  Carnivores that they are, they go beyond the occasional bug and garden pest to devour small birds, usually humming birds.

And their methods are horrific. They just hold their prey, and they eat them while they are still alive, slowly—until there is nothing left,

Some scientists are concerned that the very large mantises that are non-native to the U.S. are having an effect on the bird population. These mantises were introduced by people in the hopes they’ll eat insects such as aphids and flies. The downside is that they also consume creatures people want to have around, like butterflies and, yes, sometimes hummingbirds. And plenty of people are still releasing mantises. I expect you can still get the little pouches at garden stores with directions on how they will hatch and how to release them with good health to grow and flourish.

But who knew this would happen? Who knows today? Those babies that hatch are just darling and are complete miniatures of the mature adult. (Yes, I did that once in my total ignorance.) Once again—because we never learn from history—we are interfering with the natural world and disturbing the balance of nature. We don’t seem to ever stop and ask ourselves what the consequences of our actions will be.